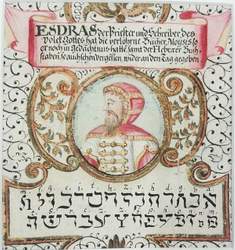 In 1540 Giambattista Palatino published his "Libro nuovo d'imparare a scrivere" in Rome, a work which includes a number of alphabets, some real, some fanciful. Palatino was an Italian calligrapher and writing master – the Palatino typeface by Herman Zapf is inspired by his work. Almost 150 years later in Germany, an anonymous calligrapher carefully reproduced some of the alphabets contained in Palatino’s book, including the ‘Alphabetum Esdram’. The calligrapher added portraits, which are lacking from Palatino’s otherwise wonderful work. In this case the portrait of ‘Ezra, the priest and scribe of God’s people’, who rescued the lost books of Moses together with the Hebrew alphabet from oblivion’. The alphabet which the calligrapher reproduced is the Hebrew alphabet, not that of Ezra - both are found in Palatino's work.